Located on the Southwest coast of Finland where the Aura river meets the Baltic sea, Turku is the oldest city in Finland. The Turku region comprises eleven municipalities and is home to over 300,000 inhabitants, making it the third largest urban area in Finland after Helsinki and Tampere.

Turku aims at achieving carbon neutrality by 2029, when the city will celebrate its 800th birthday and become climate positive with negative net emissions. The city is also committed to achieving resource wisdom (zero emissions, zero waste and a low ecological footprint) by 2040.

To support these goals, Turku collaborates with regional partners and ICLEI as part of the Circular Turku project.
Turku’s Mayor, Minna Arve, also holds the Global Circular Development Portfolio at ICLEI and as such plays a championing role to support the localization of the circular economy within the network.
Learn more about Turku’s strategic goals for resource wisdom in this video.

Local and regional governments can act as enablers and platforms for new circular economy solutions and can accelerate their adoption by effectively connecting businesses, universities and residents. The city of Turku aims to speed up the circular transition in the region though continuously strengthening multi-stakeholder collaboration.

At the European level, municipalities are asked to comply with increasingly ambitious recycling rates. However, there is a growing recognition that recycling won’t suffice to address current resource challenges if recycled materials are not used in primary production. On average, recycled materials constitute less than 12 percent of the European Union (EU) demand for materials. Moving to high-value recycling and circular economy practices that address waste challenges at their source has become a priority in the EU.

A systemic water concept from extraction to resource recovery

Led by Turku’s City Council, municipalities in the Turku region collaborated to design a systemic solution to water management in the area. From groundwater protection to energy positive treatment and nutrients recovery, the water concept developed in the Turku region offers a systemic circular economy solution to efficiently manage water, nutrients and energy at the local level.

The chemical sector plays a central role in modern economies. It allows turning raw materials into high-value products that will be used in our everyday life. Yet there is a growing recognition that raw materials extraction is fueling climate change, pollution and ecosystems degradation. Chemistry will be critical to rethink the way waste streams can be used to decrease pressure on raw materials as well as the impacts of industries as diverse as the plastic, construction, energy or electronics industries.
Yet circulating molecules is linked to many challenges, from achieving the required performance properties to complying with safety standards and finding demand for secondary uses. Small and medium enterprises play a pivotal role in developing and testing innovative solutions that can then be implemented at a bigger scale. Smart Chemistry Park offers a relevant example of how local public actors can support innovative circular economy solutions for high-value materials through industrial symbiosis.

City-owned assets and public procurement are powerful levers to influence a market-shift towards a more circular management of resources. Through its strategic procurement department, the city of Turku is currently working on decreasing the lifecycle carbon impacts of its food contracts. Along with a tool to track GHG emissions that is applied to contractors, the city is also setting goals for food waste reduction and vegetarian meals.

Laying the foundations of a circular construction indsutry

Buildings and construction consume half of the world’s natural resources and about 40 percent of the world’s energy. The sector also accounts for about a third of global greenhouse gas emissions. Finland’s national government is calling for a reduction in construction emissions by 40 per cent by 2030, and for carbon neutrality by 2050.
The city of Turku is eager to develop circular construction innovations to decrease the lifecycle impacts of buildings and infrastructures and complement its carbon neutrality strategy. An area of importance for the city is the valorization of land
masses, such as clean surplus masses, mildly contaminated lands and dredged materials. This case study explores how Turku is piloting a landmasses valorization project for local reuse in new earthworks. 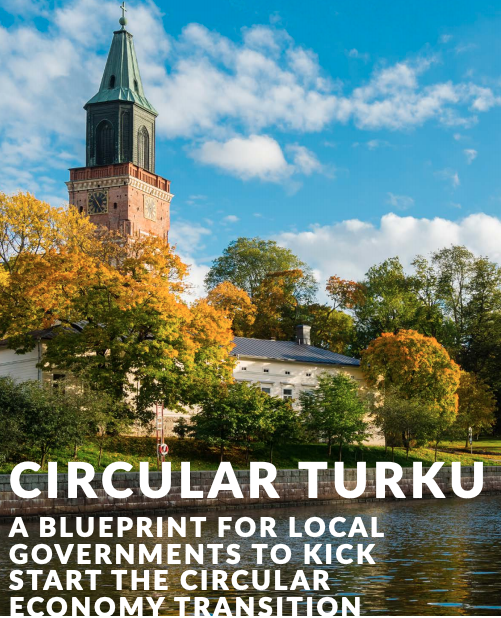 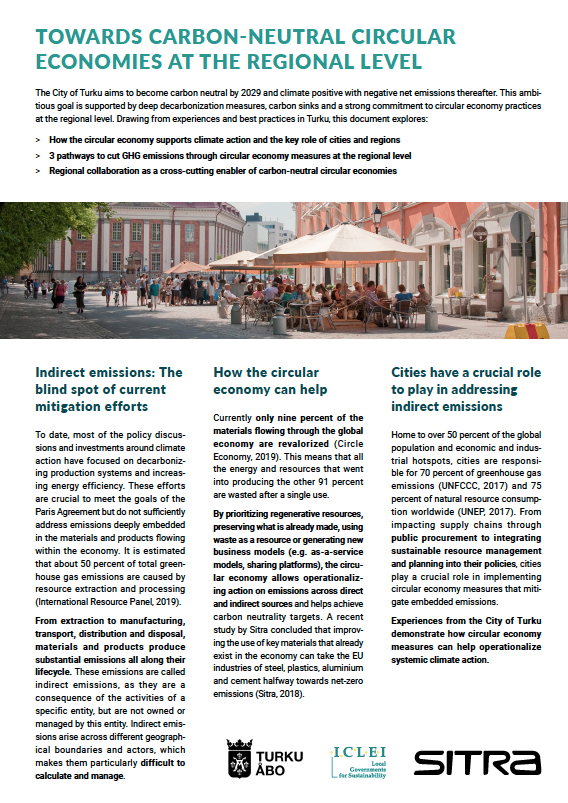 Towards Carbon-neutral Circular Economies at the Regional Level 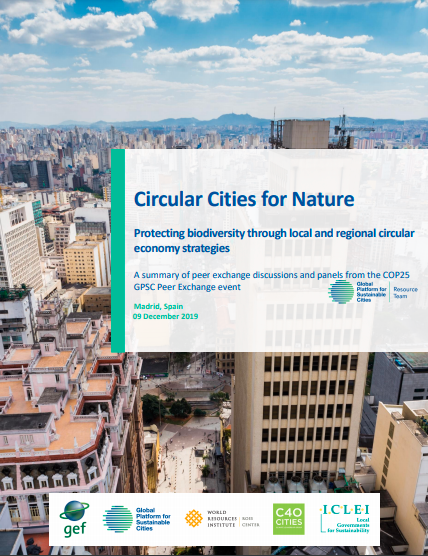