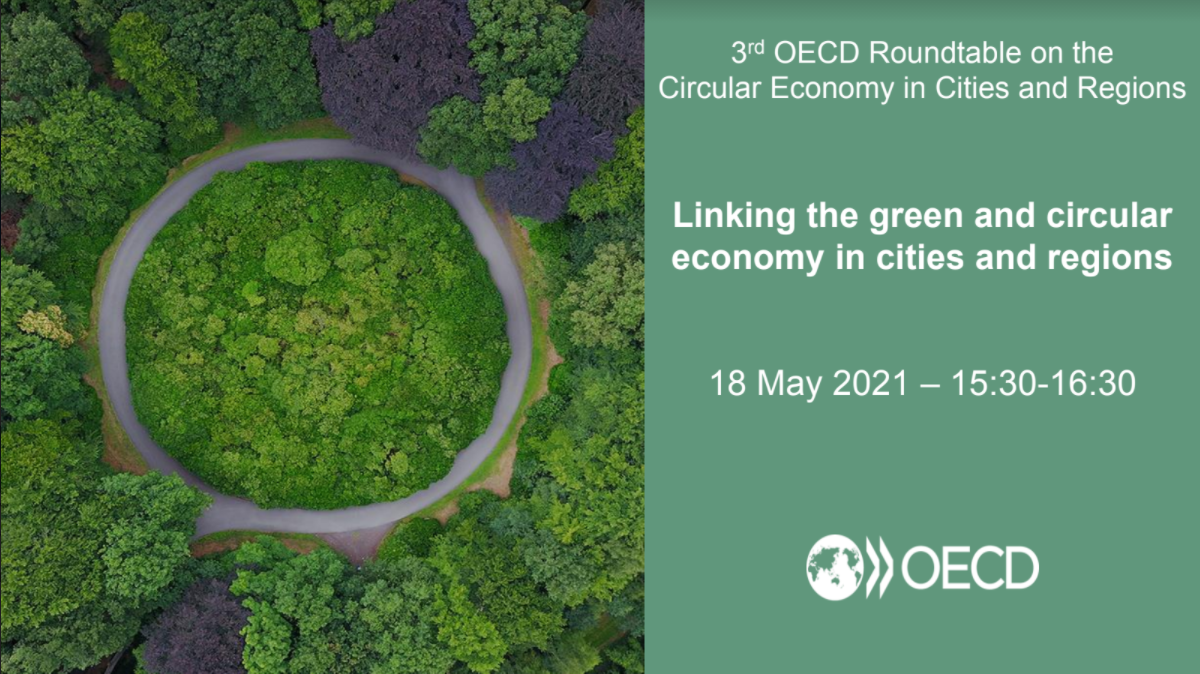 The 3rd OECD Roundtable of the OECD Programme on the Circular Economy in Cities and Regions explored how the circular economy can accelerate the blue and green economy in cities and regions. ICLEI was invited to discuss how the green and circular economy actions in cities and regions are linking with the climate change mitigation agenda towards COP 26.
Burcu Tuncer, Head of Circular Development at ICLEI World Secretariat shared concrete examples from cities implementing circular economy strategies to deliver on their local climate action plans. ICLEI together with partners Circle Economy, Metabolic and Ellen MacArthur Foundation has collated these actions under five major strategies that are interlinked with each other, namely the ICLEI Circular City Actions Framework. These five complementary strategies and their sub-strategies address different roles that local and regional governments play, from public service delivery to cooperation with local stakeholders, asset management, urban planning and regulation. They can be applied to all production, consumption and waste management processes influenced by the city or its residents and are most effective when implemented in parallel. 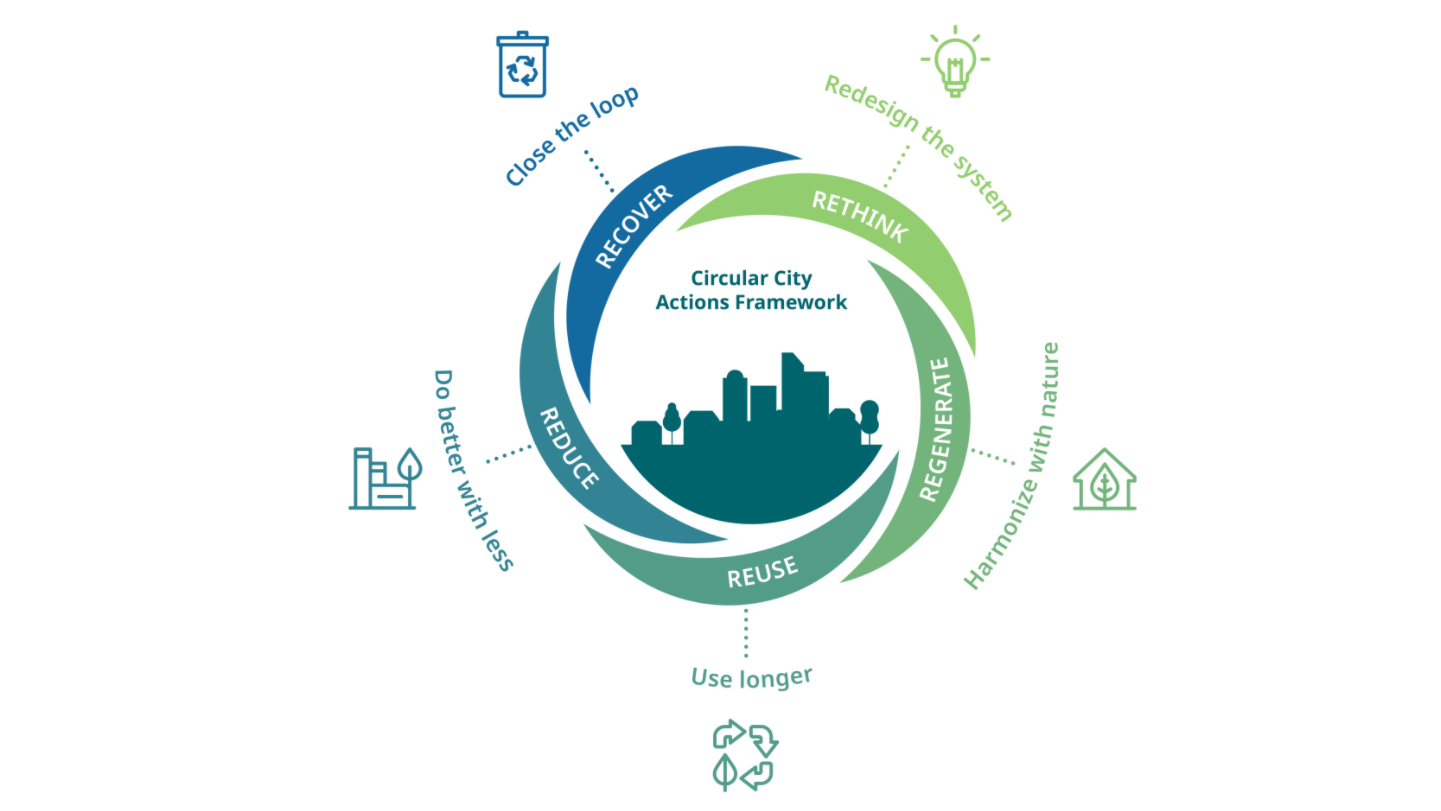 This framework is currently in application in 18 pilot cities for designing circular economy interventions for climate mitigation.

The first of the strategies, Rethink, is about how we support circular systems structurally, by reorganizing value chains and deliberately phasing out linear incentives to mitigate carbon emissions.
The Hammarby district in Stockholm, Sweden, is a prime example for the type of rethinking this strategy puts forth: the district made a transformation from being an unattractive and unsafe industrial area to one of Stockholms’ most attractive residential districts. Urban planning in the district is designed around the closed-loop metabolism concept that embraces synergies between water, energy, and transportation. The district is heated by purified waste water, combustion of household waste and biofuel; once heat has been extracted from waste water, it is used for cooling. Biogas is used to run local transit.

Regenerate is about how we ensure all infrastructure and production-consumption systems positively contribute to local resource and nutrient cycles and respect ecosystems’ regeneration rates. This includes applying nature-based solutions to address adverse environmental impacts.
For example, in Bogor City, Indonesia, where more than half of the waste in the city’s landfills is organic, the city has adopted an organic waste management protocol using the black soldier fly. Fly larvae eat organic waste and thereby reduce the amount of landfilled organic waste, which greatly contributes to avoiding carbon emissions that are caused by degradation of organic waste in landfills. Another added value is the fact that the residue from this process can be used as fertilizer, and fly eggs and larvae can be monetized as animal feed.

Extending the use of existing resources, products, and infrastructure is a key tenant of the Reuse strategies. In Belo Horizonte, Brazil, the city’s Computer Reconditioning Centre (CRC) offers citizens from low income communities to receive extensive training to restore donated post-use IT equipment into full working condition. This refurbished equipment goes on to support over 300 “digital inclusion sites” operated by the city, where Belo Horizonte locals have free access to computers and internet as well as varied training opportunities in basic digital literacy. This not only extends the use phase of the electronics but also contributes positively to social inclusion as well as skill development.

Reduce is about optimizing infrastructure for resource efficiency. For example, the city of Toronto, Canada, saves energy by using the naturally cold waters from Lake Ontario to cool its central financial district. Another example from Rizhao, China, demonstrates how this strategy is also about promoting circular business innovations, by hosting the Rizhao Economic and Technology Development Area (REDA), an eco-industrial park that demonstrates the principles of industrial symbiosis.

Recover, which is the most widely referenced, is about enabling the recovery of materials at their end of life and facilitating their reintroduction in production processes. Under the Green Cincinnati plan, the city has committed to reducing food waste with consumer campaigns and targeted food recovery networks, which collect food that would otherwise be wasted and distribute it to residents facing food insecurity. The city estimates that food waste composting already reduces carbon emissions by 18,500 tons per year.

The Circular City Actions Framework is also an integral part of the Human Settlements Pathway on Waste and Consumption, which is a space in the climate negotiations for addressing waste, consumption and circularity. It is one of the Climate Action Pathways of the Marrakech Partnership Global Climate Action (MPGCA) leading up to COP26 in Glasgow this year. The Marrakesh Partnership is an important mechanism to strengthen collaboration between governments and non-party stakeholders in the lead up to the COPs, and is a key process of the UNFCCC. The latest version of the Human Settlements Pathway with endorsements will be launched around the end of July.

Learn more about the Circular City Actions Framework and discover our resources and case studies implementing these strategies in our partner cities.